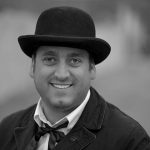 Aaron Taggert was President of Student Government for Cerro Coso Community College in 2011-2012 and Communications Officer before that. During his service, Aaron found his true love, Robert Rules, and learned about the Ralph M. Brown Act. Aaron's now deceased grandmother taught him to question and research everything. "Trust, but verify" is one of Aaron's favorite quotes and because of this philosophy, he discovered many inconstancies between state law and district policy. He then had the great fortune to run into John Fraser. John Fraser has a similar love of mischief combined with a heart big enough to want to do what it takes to create the society we all want to live in. John and Aaron were instrumental in the Vote of No Confidence in Pasadena City College's Administration. A joke was made that they should charge for all the work that they do and thus Hermetas was born. Bonnie Moir was brought to the SGCC Office and told to sign a paper. After signing she asked what this was all about. Aaron told her that she was now in student government. She reluctantly grew to love student government and Robert's Rules. She was made a partner of Hermetas later because of her organizational skills and her grounded outlook and most importantly, her willingness to put up with John and Aaron.